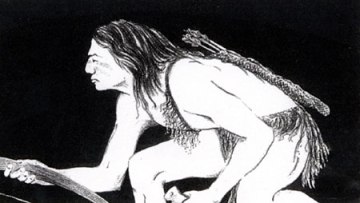 In 1998, Wild Olympic Salmon (W.O.S.) and Jefferson County Parks and Recreation partnered to create the W.O.S. picnic shelter at H.J. Carroll Park. The shelter was built and donated by Bill Irwin, a local contractor, on the W.O.S Board of Directors.

Linda Landkammer, a local landscaper, was then asked to design a garden on the acre of land surrounding it. At that time it was a barren site left over from a commercial gravel pit. She decided that using native plants would not only be beautiful but also a way to “restore” the site and to become an educational venue over time.

Sara Mall Johani, a founder of W.O.S., named the gardens after Chief Kul Kah Han, the last known Chief of the Chemaquan [sic] tribe. Living not far from the garden site in the 1850s, history informs us that these people used these plants for food, clothing and medicine in their daily lives. The garden was designed to represent several ecosystems or plant communities of the Pacific N.W. The Subalpine was the first to be developed and over time, the addition of the Montane, Damp and Dry Forest, Meadow, Wetland and Edgeland. The Shoreline ecosystem is planned for the future.

The garden has continued to take shape for over a decade due to Linda’s creative vision and diligence, on a budget of only $300/year, with the help of many local volunteers giving their time, energy and materials to the project. John Licswinko, mosaic sculpture artist created the wall depicting mountains, salmon and native plants. Audrey Miles Cherney created botanical drawings, Jefferson County Master Gardener Foundation and Washington Native Plant Society gave grants for projects. Several local groups including the Port Townsend and Tri-Area Garden Clubs gave funds or plants. See our website for lists of additional volunteers.

The Stewardship Program began in 2003 in which individuals focus on one ecosystem each week providing for the special needs of the plants in that area. In 2008 we enjoyed a huge growth spurt when Robin Nye signed on as Steward of the Forest area. She jumped in with “all fours”, clearing and replacing the weeds with native woodland plants. In addition, she began acting as unofficial assistant to Linda on major issues and decisions made on the project.

From 2007 on, we have held an educational event each spring during Washington Native Plant Appreciation Week. Our presentations have included; ethnobotany, beneficial mycorrhizae, and attracting birds. March 2012-13 was a stellar year for the garden when our Steering Committee met monthly to support the completion of several basic infrastructure projects such as additional paths, plant signage, the kiosk and a map. Bill Irwin located all of the necessary businesses and tradespersons who generously donated all labor and materials for the kiosk; Dick Keithahn- architect, Carl’s Lumber- building materials, Center Valley Construction-carpentry, Michael Hill and Molly Hilt-site preparation. The services of Shannon Glass, landscape architect, were invaluable in creating the first version of the colorful garden map.  As of June 2013, the culmination of this cooperative community effort allowed us to hold our Grand Opening as a self guided interpretive site for the community at large.